What you need to know: Cloud vs. hybrid vs. local business data

When Dynamics 365 for Operations was released in February 2016 (called AX7 back then), many customers and partners were startled over the face of an ERP system only available in the cloud. This change from Microsoft would require big changes in people’s mindset. Although the move to the cloud is the right step to make (and quite exciting too, if I may add) there are ERP users who are skeptical and nervous about the feeling of losing control of their data by putting it in the cloud. Fortunately, the concerns were received well and actions have been taken, creating possibilities for all customers to select the deployment option that fits their needs –- offering not two, but three possible deployment scenarios.

Cloud
The cloud is the flagship of the Dynamics 365 for Operations deployment offerings. This subscription based SAAS offering allows fully automated deployments, updates and code promotions managed by Microsoft through the use of Lifecycle Services (LCS), subsequently reducing the cost for hardware, installation, maintenance, and implementation. All data is stored within Microsoft managed data centers and data responsibility lies on Microsoft. The cloud is fully integrated with the Office 365 platform and other cloud offerings in terms of Machine Learning, PowerApps, Power BI, Flow, etc.

Cloud and edge (Hybrid)
The cloud and edge deployment scenario, also mentioned as the "hybrid," will allow the you to run your business processes and transactions in a combination of cloud and local environments. Also called edges (based on sites), where data is stored local or on a hosted data center and not in the Microsoft managed data centers. Each one of these environments are referred to as "My Workplace." Where the "hybrid" comes in, is that there will be a data replication process to Microsoft managed data centers, where a single view of data across all environments is provided. This is called "My Workplaces," making it possible to take advantage of all the Microsoft cloud services, such as automatic updates, Power BI, Customer and Cognitive services, PowerApps, Flow, etc.  The cloud and edge option is currently available for POS systems, with full availability scheduled in the second half of 2017.

Local business data (On-Premise)
As some companies might not be ready to store data in the cloud because of regulations, policies, geographical cloud adoption, recent hardware investments, or for other reasons, Microsoft will be providing a deployment scenario where no business data will be stored in the cloud. This is referred to as "local business data" or on-premise. Where the cloud and edge option enables data synchronization, this feature is simply turned off in the local business data solution. All servers and databases will run within your or your partner’s data centers. The applications lifecycle is still managed in LCS, designing business processes and monitoring the environment’s system health. The local business data is currently available as a private preview with a planned general availability during the summer of 2017.

Making the right decision – Am I stuck after making a choice?
So which way to go and what to choose? That can be a tough question. But what you should know is that it is always possible to move from one scenario to another -- at least if you want to start off from a local business data perspective and then later turn on data synchronization to be able to take full advantage of the Microsoft cloud offerings. 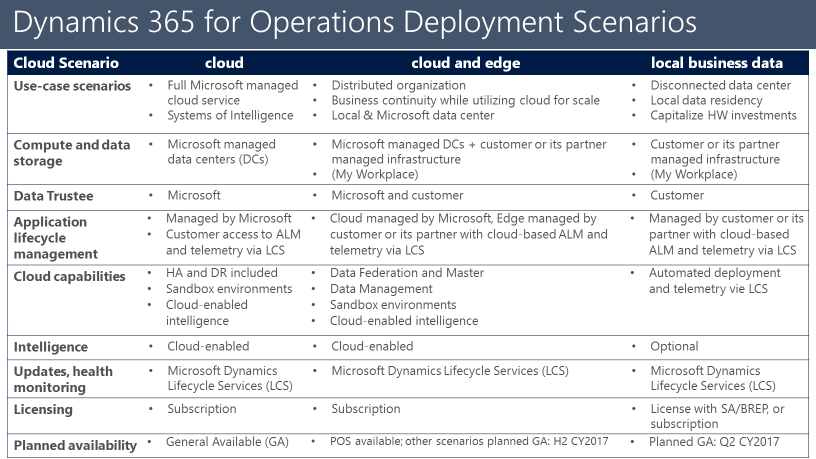 LIst of Features not Included in the On-Premise (Local Business Data) Version:

For a full list see the official Microsoft documentation here:

Hit the bullseye with your ERP implementation methodology: Q&A with Arbela’s Viktor Lesiv

How to prepare for your next ERP audit

Here's how & why you should upgrade your CRM to the cloud

Striking a chord for change management in mid-market ERP: Q&A with Alexios Kostilinis

6 struggles with ERP security: What to be aware of